There is a special prayer of Prophet Yunus (PBUH) that he recited in the belly of the fish. It is described in 87th verse of Surah al-Anbya. This verse is known as “Prayer of Distress” or “Ayah Kareema”, meaning The Glorious Verse.

The supplication of Prophet Yunus when he supplicated while in the belly of the whale was: “There is none worthy of worship except You, Glory to You, Indeed, I have been of the transgressors.” So indeed, no Muslim man supplicates with it for anything, ever, except Allah responds to him.

Here is the full Arabic text and translation of the verse: 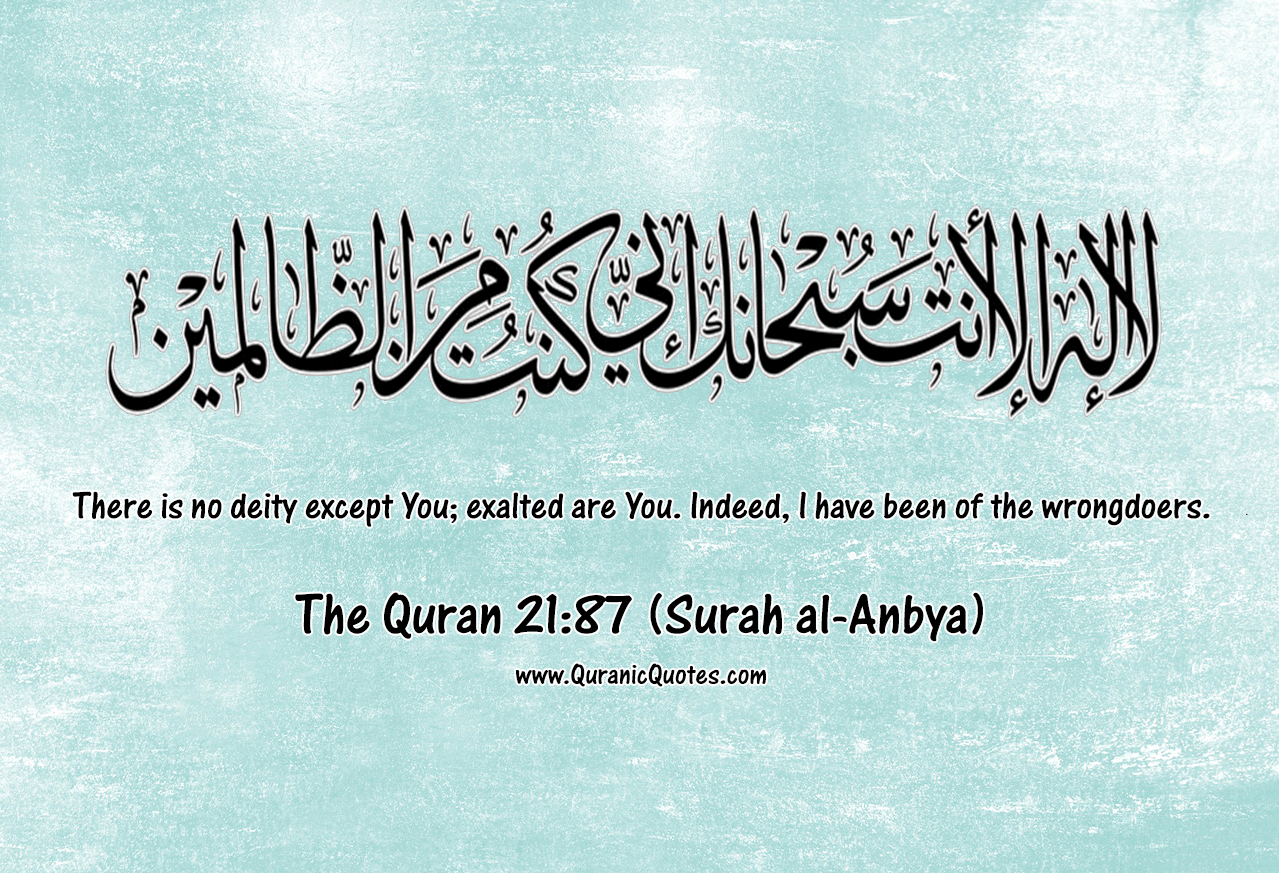 Allah sent Prophet Yunus (Jonah) ibn Matta (PBUH) to the people of Nineveh, a town in Iraq. He called his people towards faith and righteousness but they rejected and persisted in their disbelief and wrongdoings. Disappointed and frustrated, Prophet Yunus (PBUH) left them in anger, as mentioned in Surah al-Anbya: [2]

And mention the man of the fish, when he went off in anger and thought that We would not decree anything upon him.

Prophet Yunus (PBUH) then boarded a ship, but it got caught up in a storm. People in the ship drew lots to decide to throw someone out of the ship in an effort to lighten the load. Prophet Yunus (PBUH) lost the draw three times. He was thrown out and a fish came and swallowed him. In Surah as-Saffat, Allah says: [3]

And indeed, Jonah was among the messengers. When he ran to the laden ship, And then drew lots and was of those rejected; And the fish swallowed him while he was blameworthy;

The Value of Repentance

In the belly of the fish, Prophet Yunus (PBUH) realized his mistake and called out to Allah. So Allah accepted Prophet Yunus (PBUH)’s supplication and forgave him his error of impatience in deserting his people without waiting for Allah’s Instruction. Allah has revealed this incident in Surah al-Anbya saying: [4]

And he called out within the darknesses, “There is no deity except You; exalted are You. Indeed, I have been of the wrongdoers.” So We responded to him and saved him from the distress. And thus do We save the believers.

In Surah as-Saffat, Allah mentions that had it not been for Prophet Yunus (PBUH)’s sincere repentance and his invocations to Him, he would have stayed in the belly of fish till the Day of Judgment! [5]

Had he not been of them who glorify Allah, He would have remained in its belly till the day when they are raised.

On the other hand, when Prophet Yunus (PBUH) left, the people observed the signs of punishment. They realized their mistakes and went out to the desert asking for Allah’s Forgiveness. Thus, Allah forgave them. Allah says in the Quran in Surah Yunus: [6]

If only there had been a community (of all those that were destroyed of old) that believed and profited by its belief as did the folk of Jonah! When they believed We drew off from them the torment of disgrace in the life of the world and gave them comfort for a while.

What makes this prayer so special are the aspects that lie in this single prayer. Which are:

While reciting Ayah Kareema, in the first part, one declares his belief in Allah and His Attributes by saying “لا اله الا” or “There is no deity except You”. Therefore, the verse starts with acknowledging the Lordship of Allah.

And in the second part, one glorifies Allah and praises Him as “انت سبحانك” or “Exalted are You.” So here Ayah Kareema declares that all the Glory rests with Him and only He is the Glorified One.

And lastly, Ayah Kareema informs us of the value of repentance. The final part of the verse states that “اني كنت من الظالمين” or “Indeed, I have been of the wrongdoers.”

And we all know that Allah loves those who repent and turn to Him. Allah Himself declares His Love for such people in Surah al-Baqarah. [8]

Hence, Life of Prophet Yunus (PBUH) guides us to be patient in all matters of our life. We must acknowledge us our mistakes, repent and never lose hope in His Mercy or Forgiveness.

Whenever we are in a difficult or a distressed situation, we should call upon Allah using Ayah Kareema. Allah Himself says in Surah al-Ghafir: [7]

And your Lord says, “Call upon Me; I will respond to you.”

In a nutshell, reciting Ayah Kareema is a good way to overcome our problems and seek the Mercy of Allah.