We send down the Quran as a healing and mercy for the believers, but it only increases the wrongdoers in loss.

The above Ayah has a deep meaning. According to Imam al-Kurtubi, scholars understand the word “healing” in different ways. Some believe that by healing, Allah (SWT) means the healing of the heart, when doubts and ignorance are eradicated from the heart of a person, when the diseases of the soul are cured, which prevent the understanding of the signs that indicate to Muslims the existence of the Most High Allah (SWT). Others believe that the Ayah speaks of healing as Ruqyah, the treatment of bodily ailments that can be cured with the help of the Quran, reciting its specific Surahs and reciting dua to protect against ailments and diseases.

Ruqyah is a request or supplication, a dua to Allah with healing by reading or writing the texts of the Quranic Verses (there are no reliable hadiths on this subject, but all theologians agree that writing down the verses for treatment is legal). For the treatment of believers, there is no better remedy than the healing of the Quran.

Mention of the Ruqyah in the Hadith

The healing of the Quran is mentioned in the Quran, and also in the Hadith of the Prophet Muhammad (PBUH): Imam al-Darakutni relates a story told by Abu Said al-Khudri about how the Prophet Muhammad (PBUH) once sent him along with an army of thirty horsemen, and near one of the villages the army had to stop, but when they asked for shelter to their owners, they refused.

Later, they were informed by the locals that a snake had bitten the chief of this tribe, and the riders were asked if there was anyone among them who could cure a snake bite. Then Abu Said al-Khudri offered to help, telling them that he knew how to do it, but for such healing, he asked for something to give to his people. The locals promised thirty sheep for the treatment of their leader, and then Abu Said performed Ruqyah with the help of The Quran: after reading the Surah “al-Fatihah” over the leader seven times, following which the leader recovered.

The happy people of the tribe brought treats to the horsemen in gratitude for the healing of their leader, and also brought sheep, as promised, but the companions refused to eat, saying that they needed to go back to the Prophet Muhammad and ask him. After returning to Madinah, this incident was told to the Messenger of Allah (PBUH), and the Prophet asked Abu Said al-Khudri how he understood that Ruqyah was the Surah “Al-Fatihah”, to which Abu Said al-Khudri replied that this Ruqyah for healing the leader was instilled in his heart. Then the Prophet commanded that the sheep be divided and that a portion be given to him.

There are many references to Ruqyah, healing by the Quran, in the hadith. The mother of the faithful, Hz Aisha (RA), said that when the Prophet Muhammad (PBUH) was unwell, he performed such a Ruqyah: blowing on his body, he read the last two Surahs from the Quran, but when his condition became even worse, Aisha (RA) began to perform this Ruqyah for him: she blew and rubbed her husband’s forehead with her hands.

Generally, the content of the Quran is a storehous of useful knowledge and guidance that we can use for healing, for medical purposes, and also for bringing spiritual and physical advantages in our lives. Here are some such verses from The Quran: 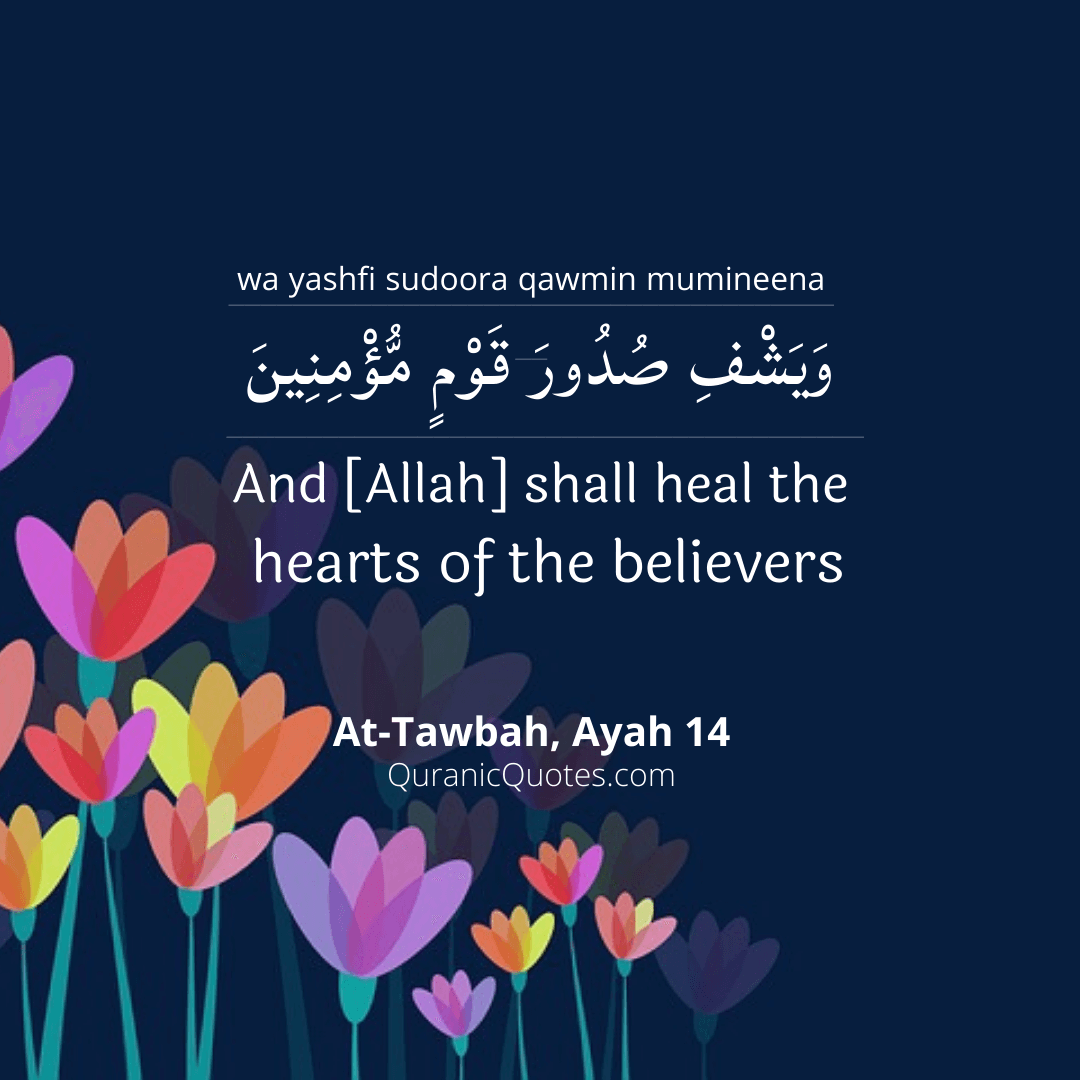 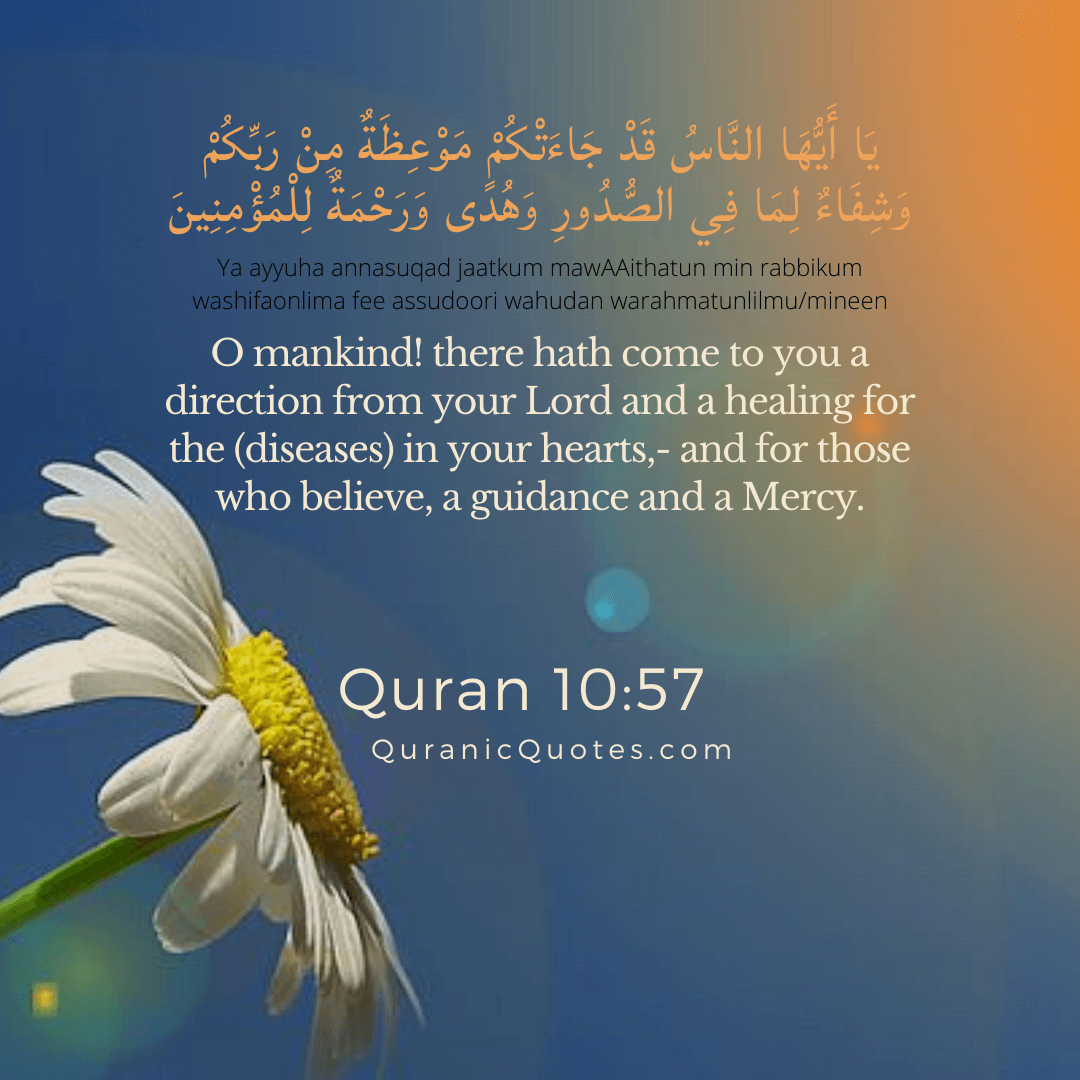 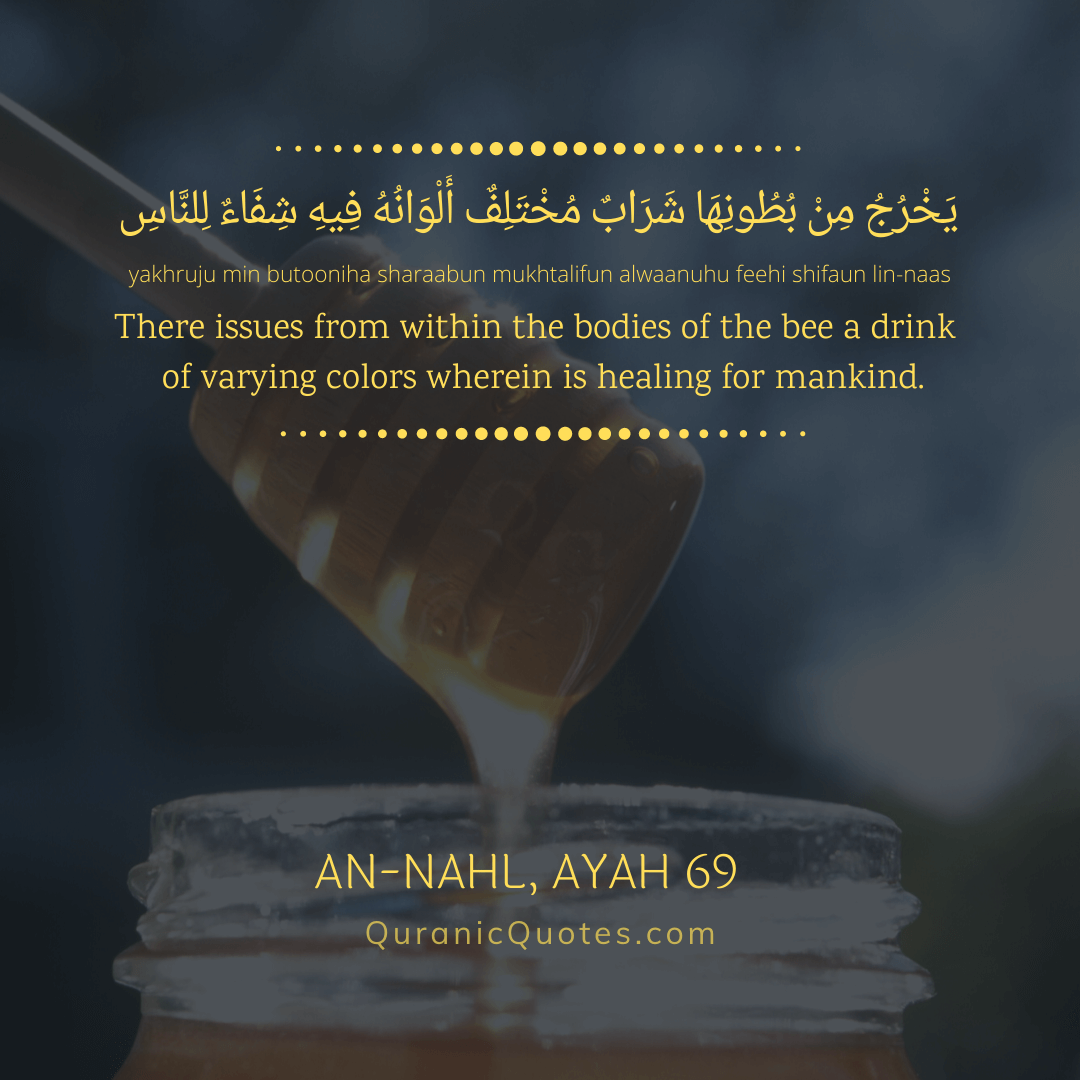 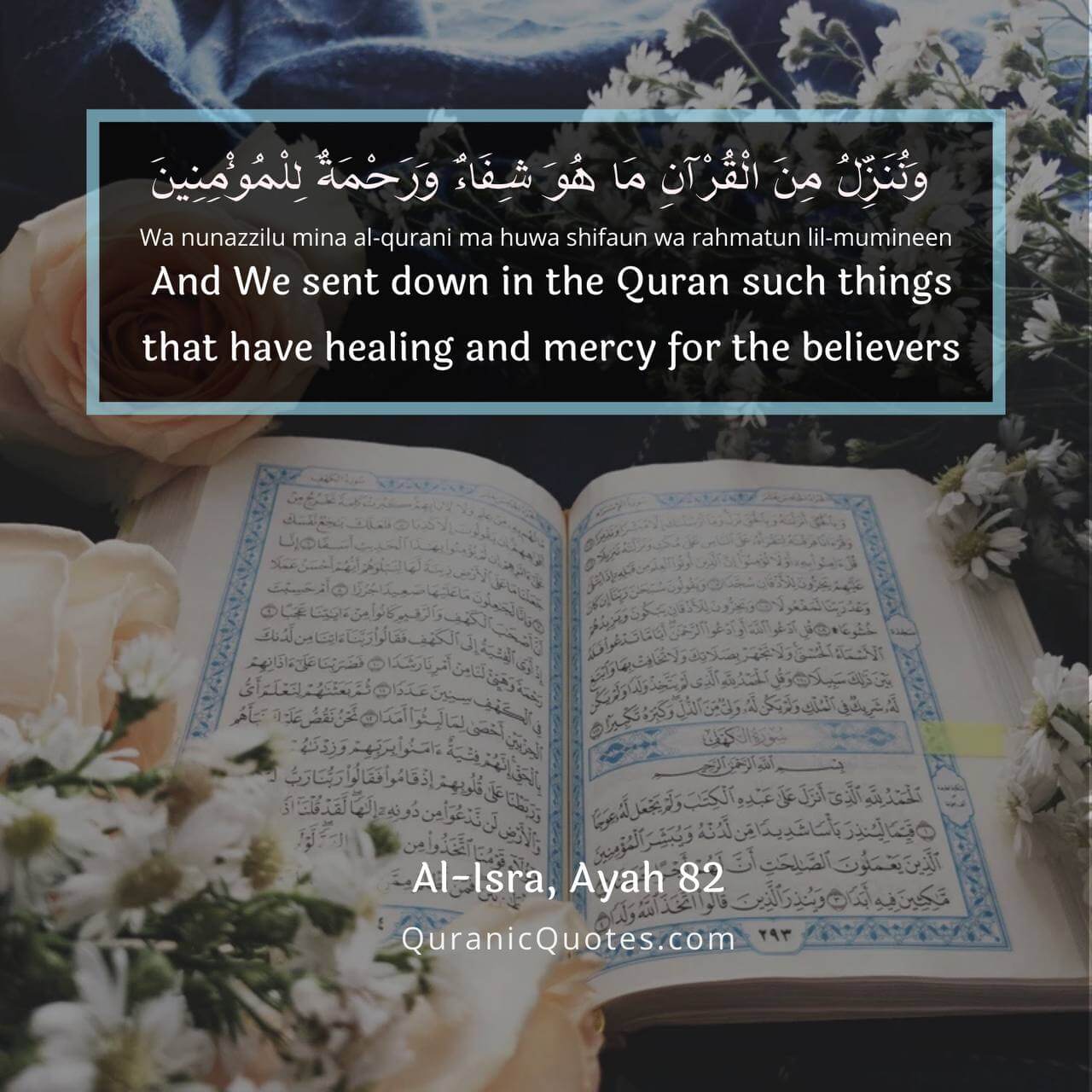 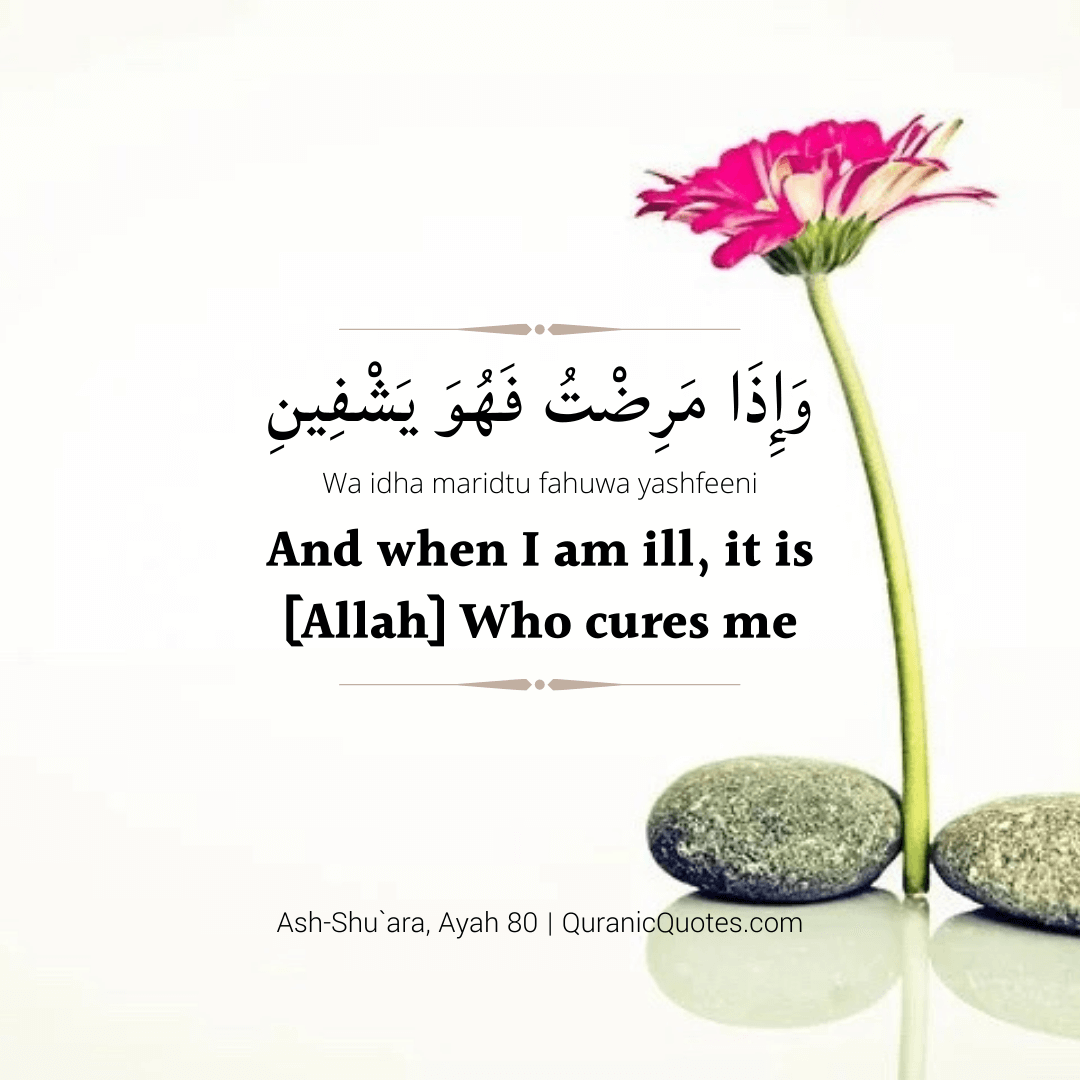 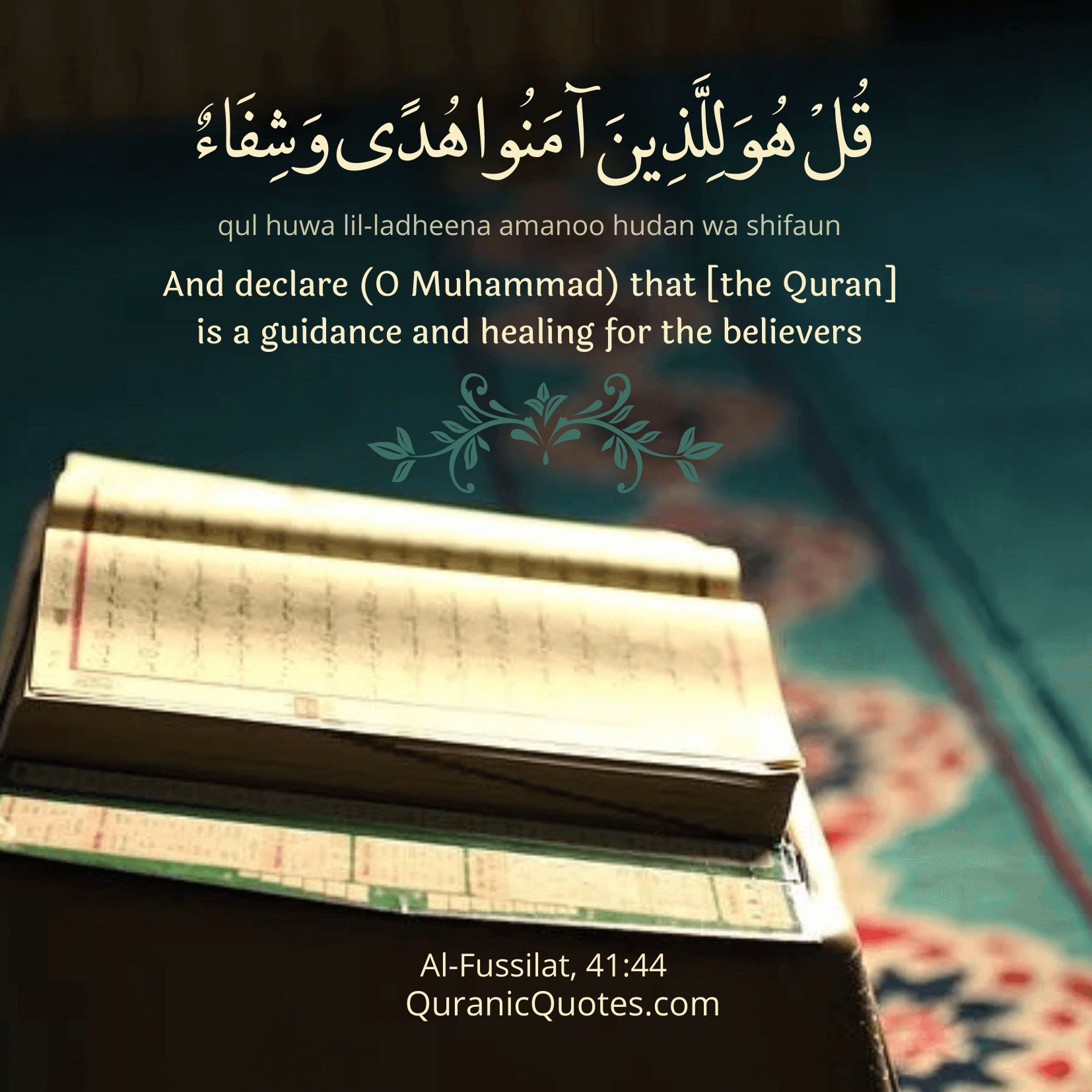 When it comes to illness, in addition to medical treatment and prayers, one more thing is of prime importance — patience, or Sabr. You can read about Quranic verses related to patience here.