Surah al-Kafirun is the 109th Surah of The Quran. This Meccan surah, consisting of six verses, is so named because it contains an appeal that the Messenger of Allah (PBUH) was to convey to the unbelievers.

The main theme of Surah al-Kafirun is the affirmation of monotheism and renunciation of unbelief (Kufr). This Surah also rejects the practice of assigning companions to Allah (Shirk), as well as polytheism.

Surah al-Kafirun: “For You is Your Religion; For Me is My Religion.”

Surah al-Kafirun is designed to draw a dividing line between faith and unbelief, to distinguish between monotheism and Kufr/Shirk, and to separate the right path from wrong.

This Surah was revealed when the polytheists of Mecca attempted to come to an agreement with the Messenger of Allah (PBUH), saying that they were ready to make concessions. They naively assumed that the Messenger of Allah (PBUH) would agree to their terms. As such, they offered him an option that they thought would suit everyone and serve as a compromise: for one year Muslims will worship their deities, and for the next year, the polytheists will worship Allah.

Of course, the Messenger of Allah (PBUH) would never agree to this, because he was the Final Messenger sent by the Lord of the Worlds. His purpose was  to convey the Word of Allah to His people.

As such, this Surah was sent down as a reply to the polytheists’ offer — its essence can be summed up as: “I have warned you most sternly against error, unbelief, and associating partners with Allah, as well as against the evil and terrible consequences of these acts, and there was no negligence or omission in this warning, but if you are determined not to heed my appeal and remain deaf to all my sincere warnings, then leave me alone. Stay with your religion, and I will no doubt stay with mine, and it cannot be otherwise.”

First, let us look at Surah al-Kafirun in Arabic: 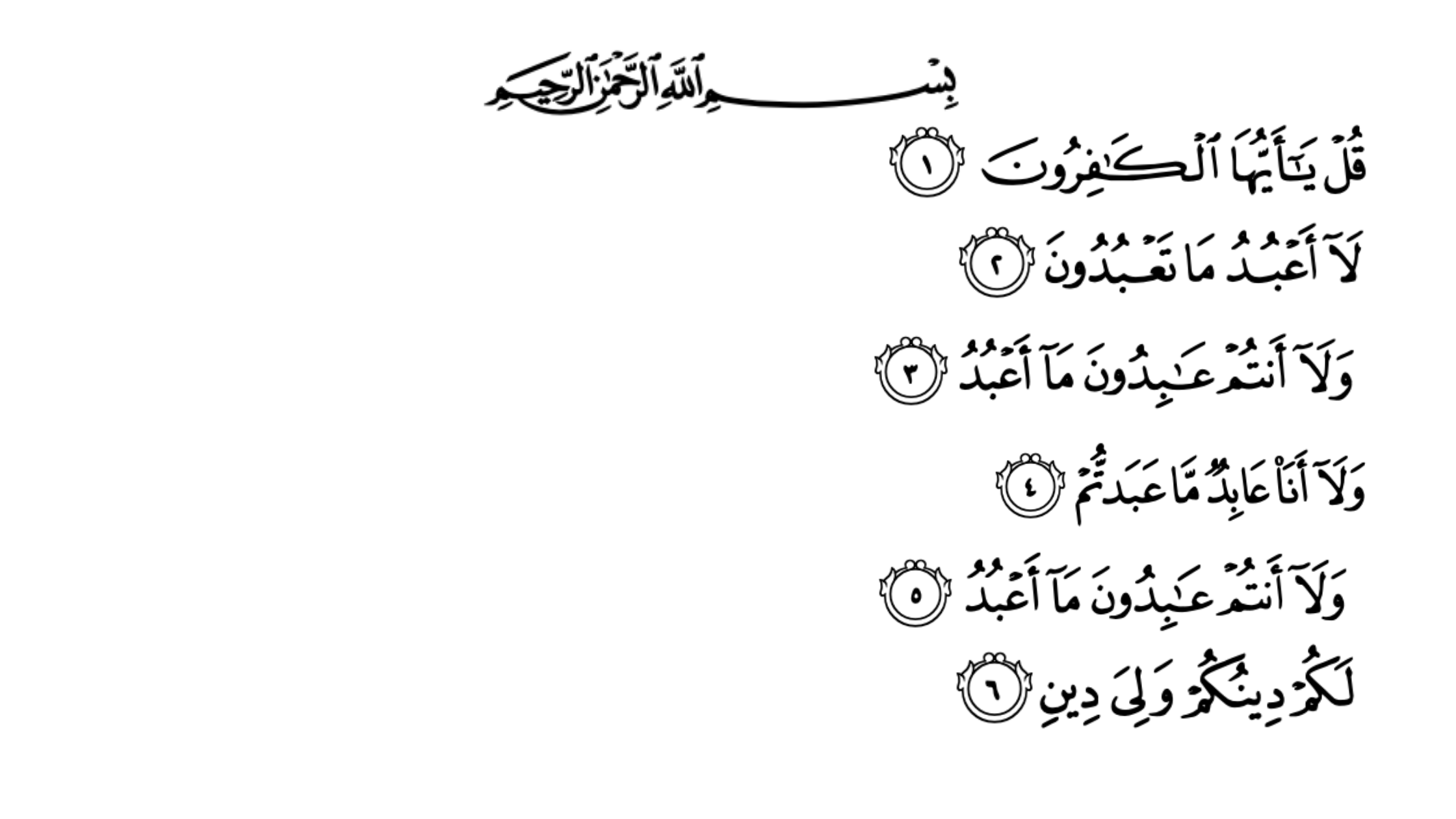 Here is each verse of Surah al-Kafirun as a separate image. Feel free to share these with your family and friends. 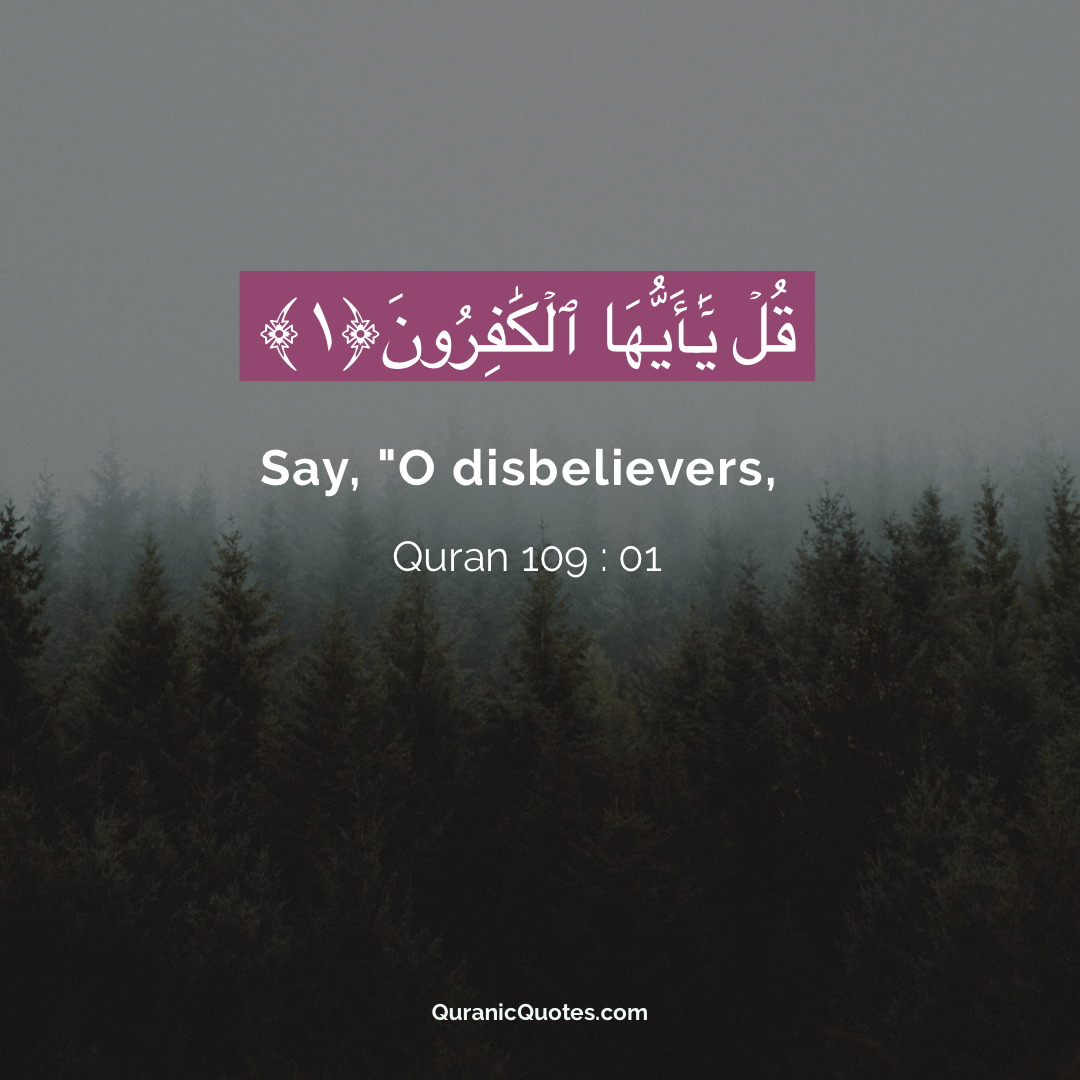 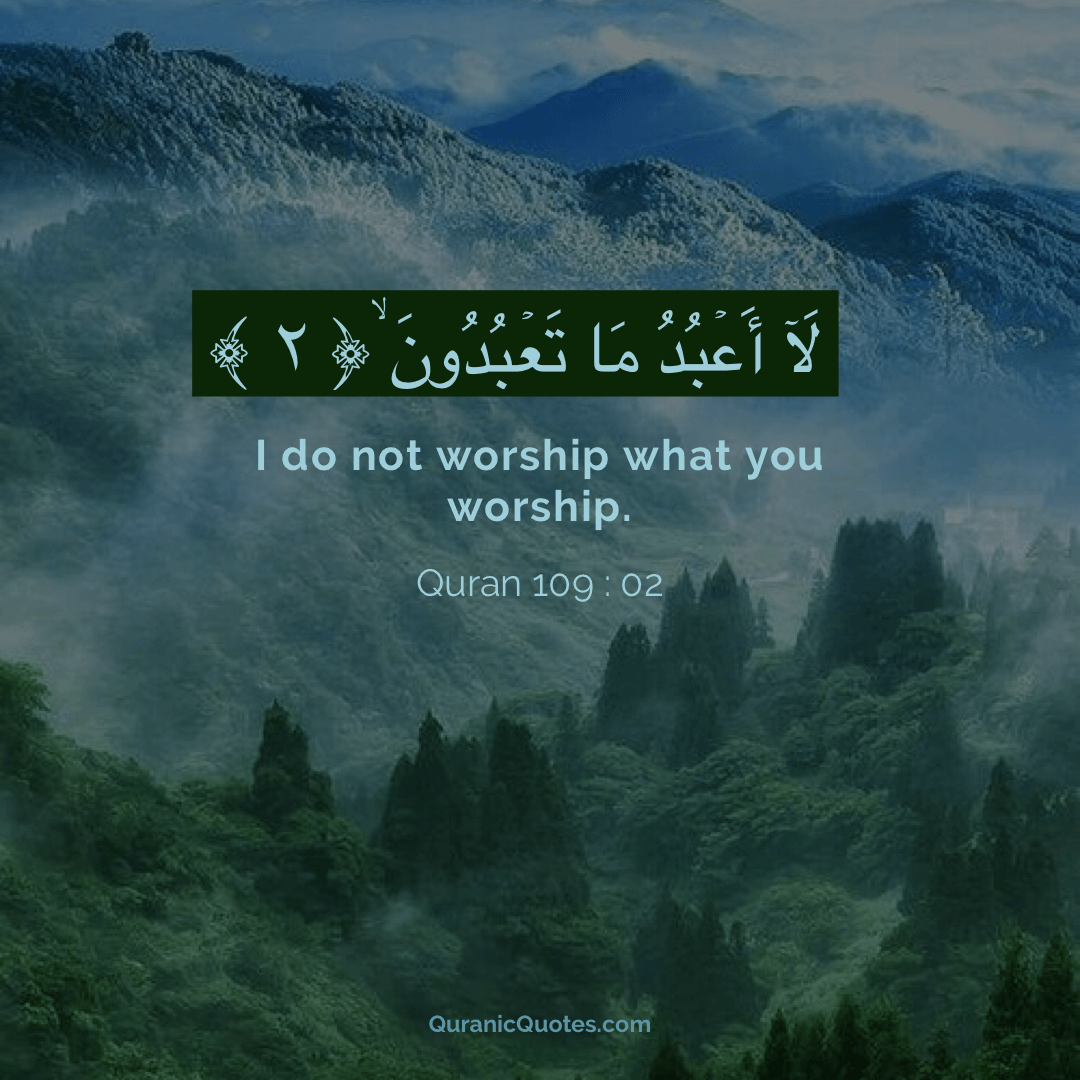 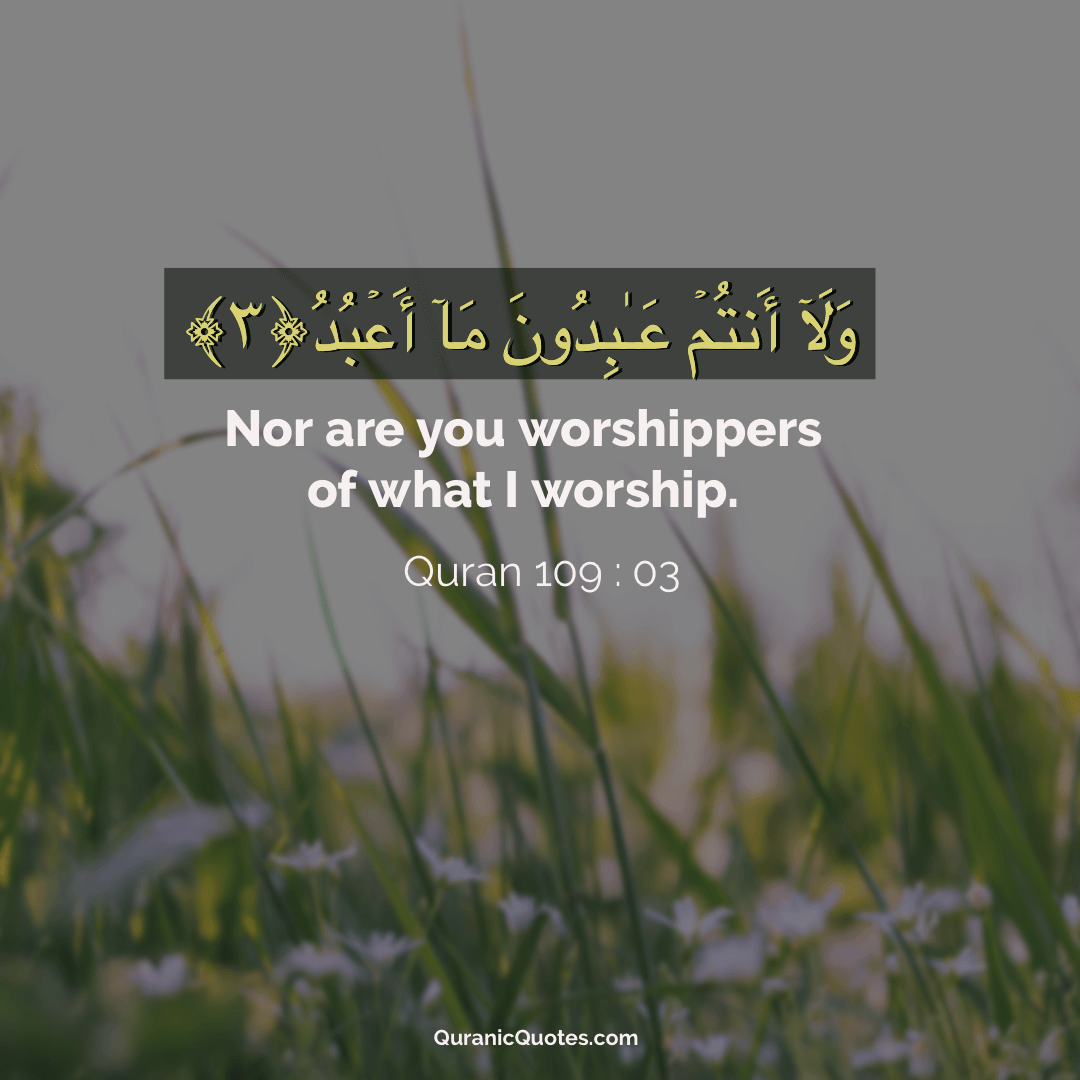 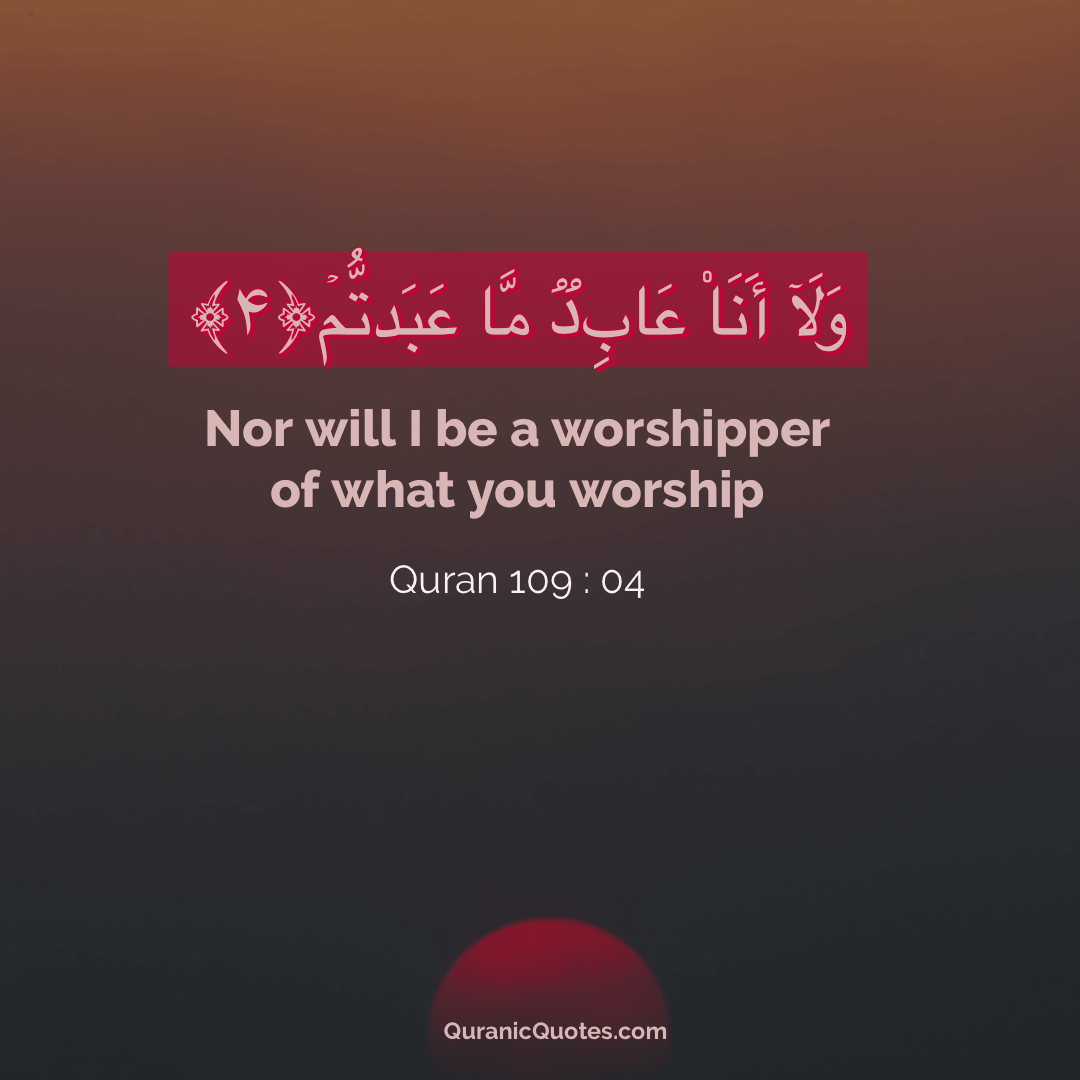 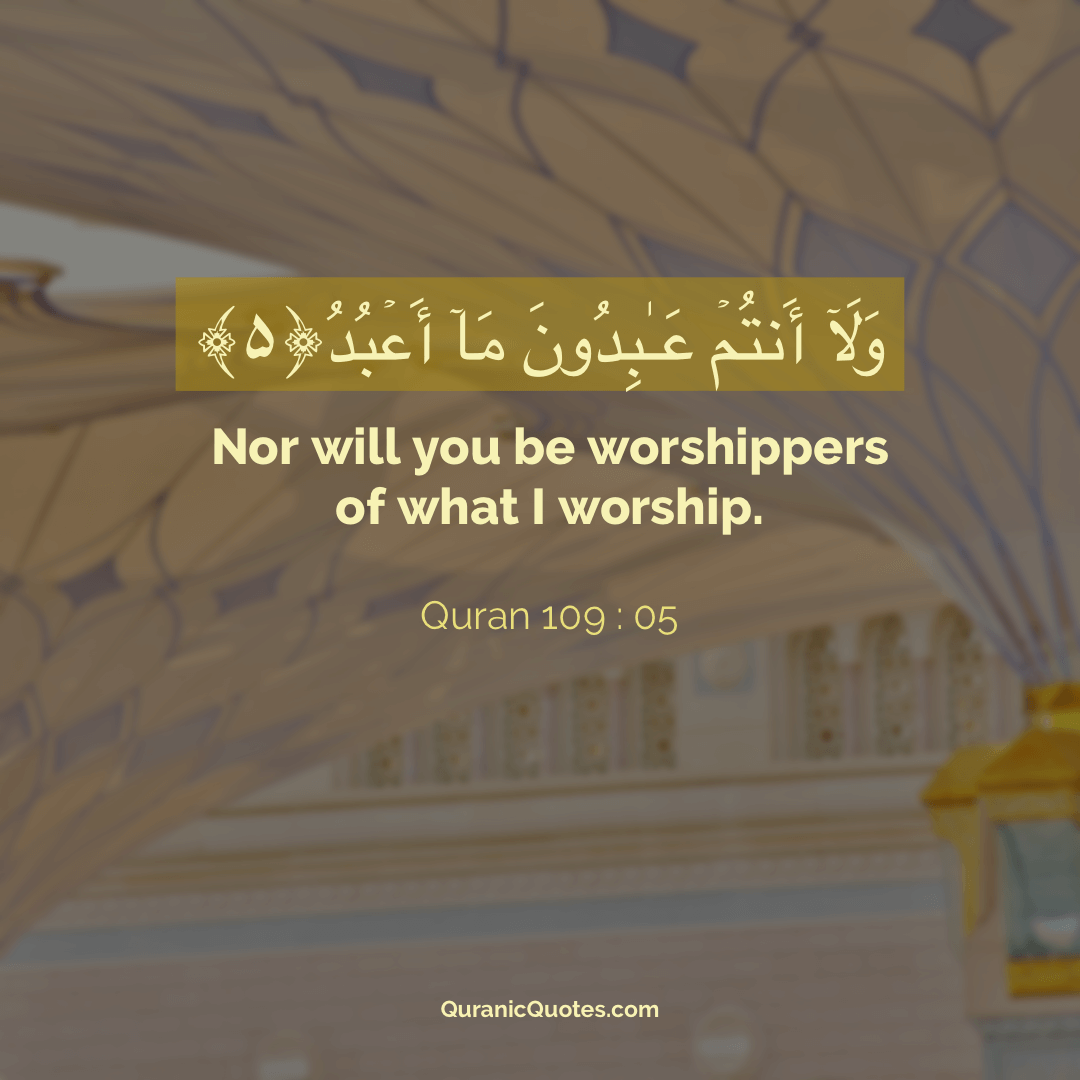 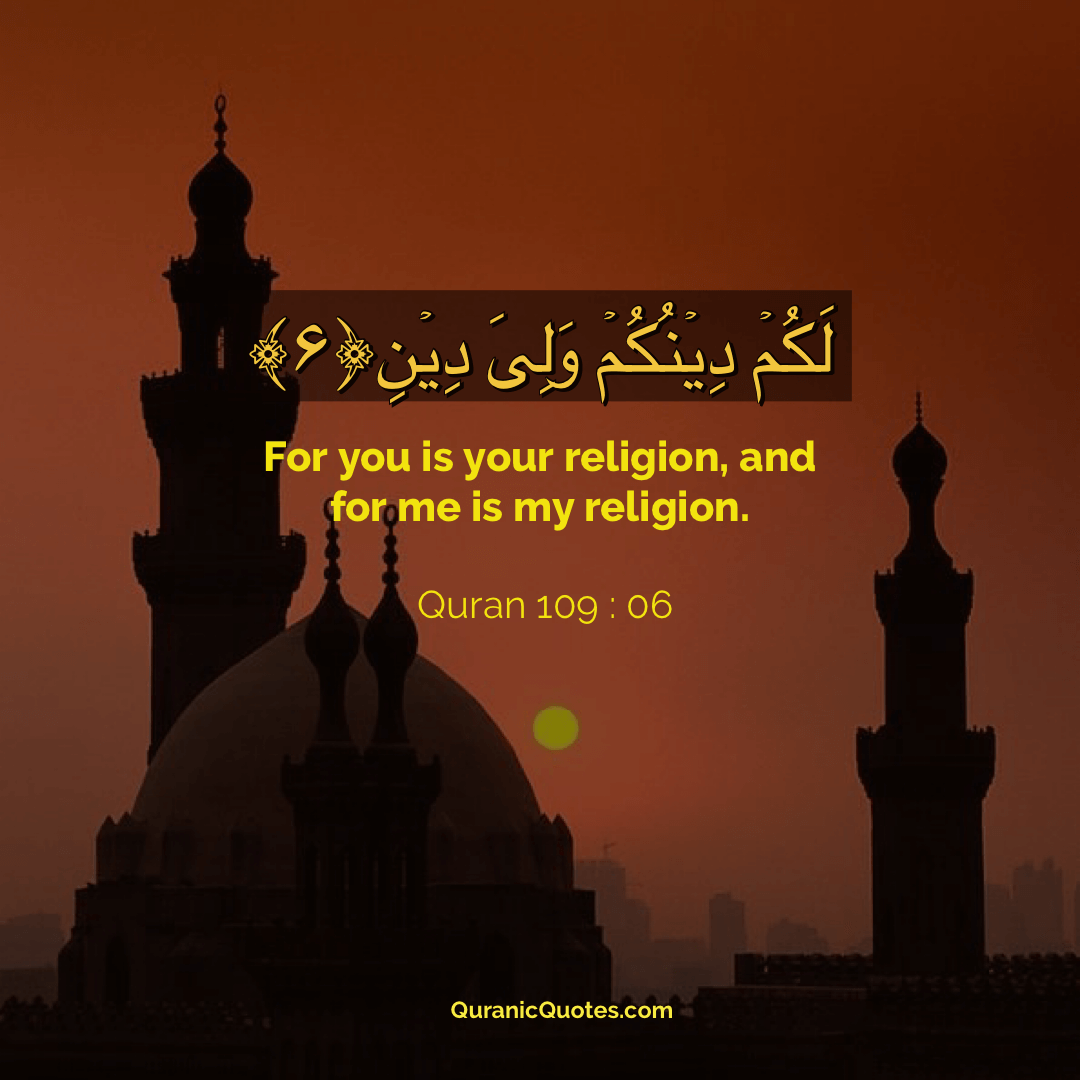 It is considered Sunnah to recite Surah al-Kafirun in the second Rak’ah of the Witr prayer (Isha). It should be noted that Prophet Muhammad (PBUH) also recited Surah al-Kafirun during the morning prayer (Fajr), as stated in one of the Hadith reported by Hz Abu Hurairah (RA) {see: Riyad as-Salihin, Book 8, Hadith 118}

The Messenger of Allah (PBUH) recited in the two supererogatory Rak’ah of the Fajr prayer Surah al-Kafirun (in the first Rak’ah), and Surah al-Ikhlas (in the second Rak’ah).

Read about other related Surahs: al-Ikhlas, an-Nas and al-Falaq.